skip to main | skip to sidebar

Dare You Delve Inside the Mind of Film Director Mark Locke?!... 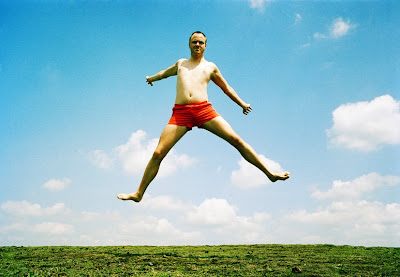 …Those who have would probably say they couldn’t forget the experience, and wouldn’t want to give up the laughs for anything.

Yes, Birmingham has a secret you should definitely know about.

People who saw Locke’s acclaimed 2002 film Crust—pub landlord and failing boxer, plus girlfriend Shaz, take on the world... aided by a lethal seven-foot boxing shrimp—know the man is not afraid to be different, nor does he give a damn for humoring trends. He just wants to make good films, for the people.

While countless young film-makers spent the early ‘90s moaning about ‘breaking-in’, Locke grabbed a camera, took the film world by the balls and shook it ‘til it screamed.
In 2009, long after critics hailed Locke’s early shoestring shorts as cult-classics (including curry house nightmare, Eat In and When I Leave The Sixth Form I’m Getting Straight Into Something Media Related), the man is back with Three Stags, and he hasn’t lost his grip.

Q: Your shorts were unique—unusually touching, hilarious, and occasionally disgusting all at once. What was your attitude when you started and how has it developed since?
A: It’s more or less stayed the same, I just try to make the kind of films I’d personally like to see. Though there’s always a battle between the side of me that comes up with odd ideas and the side that tries to ground them in reality. So the material usually ends up somewhere in the middle, for example three ordinary people and an enlarged crustacean, or vampires running a garden centre.

Music videos seem to have been a natural progression from your shorts. What was the big break that made you think ‘great, no more crap jobs!’?
There wasn’t one, and there’s always a chance that a crap job might have to be an option because even with music videos - I think of them as pretty personal things and I’m not gonna chase big gigs for money if I’m not into the music. However I recently became a Dad so watch this space for my Girls Aloud video.

People may say ‘Mark who…Locke?’, even though you’ve just finished two new Misty’s Big Adventure videos and before that directed infamous anti-folk hero Jeffrey Lewis’s Williamsburg Will Oldham Horror. Where have you been since 2002’s Crust?
Crust sent me into a bit of a spin 'cos the final thing didn’t totally feel like my movie. I’m still proud I had the balls to try it as a first feature but the vibe of it is a bit Full Monty with big shrimp whereas I was after more of a Jim Jarmusch film with big shrimp kinda feel. So I was in no rush to make another three million quid movie and I was also enjoying doing music videos for bands I loved for a while. But I kept writing new stuff and eventually stuck my head above the parapet to get something made, just on a lower budget and on my own terms, like my shorts.

How did you get to know Kevin McNally (of both Crust and Pirates of the Caribbean fame)?
He came in and he was great. He’s a great guy. He had his Pirates beard at our premiere as he was just off to do the first one, and he snogged my next door neighbour Jill with it.

You’re known universally for comedy. What other M.L. media projects people might not be aware of?
I recently did an UNKLE video, which surprised a few people—but it had the required moodiness and just won a best music video award, so I’m allowed to call it my award-winning UNKLE video now. Plus my two new Misty’s videos aren’t comedy either, in fact you might even get choked up over them if you’re in any way sensitive.

You begin shooting Three Stags this summer. What can fans of your previous work expect? How will the world react to the second-feature coming of Mark Locke... is it ready for the shake down?
Well there’s no bonkers idea for a start, since some stuff I wanna do is low concept and 100% reality-based. It’s about a non-macho guy trying to navigate his way through three different stag weekends in one summer, and has what could be my favourite movie tagline ever – ‘five men, one big pussy’. But it’s not gonna be some cheesy Britcom, it’s in the spirit of films like Swingers and Sideways and other good American Indies that are low key with a lot of heart. Although I’ll try and deliver on the tits and debagging front too, obviously.

Three Stags begins pre-production in the spring. To see a selection of Mark’s films visit www.fortmarkfilms.com.

Interview by Chris Pink
Posted by Gabriel Solomons at 13:58

Gabriel Solomons
Bath, United Kingdom
My ongoing attempt to simplify this highly complex business of parenthood. I hope these quick and - at times - obscure graphic doodles raise a smile, make you think or perhaps, even both.